Ever since I decided to go back to blogging on a regular basis, I’ve been plagued by a massive, dare I say epic, case of writer’s block.
For the last week, I’ve wracked my brain for a topic to write about.
Each time I sit down at my desk and look at my empty screen.
I went over past blog posts. I spent hours on Facebook, Twitter, and Pinterest trying to find an idea that would be worthy of an essay. And, just to be clear, all the hours reading social media sites was only for research. I did not enjoy doing any of these things. (I sense your doubt.)
No ideas were coming to me.
Nothing. Nada. Zilch.
Finally at the end of my rope, I came up with twenty ways to get over writer’s block: 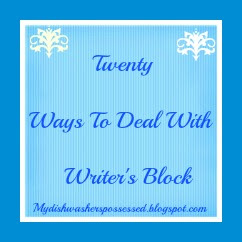 * I would like to thank the following amazing bloggers for taking the time to give me some great suggestions and support through my (very dramatic) hour of need; Faith of An Edible Mosaic, Gina of Totally Full Of It, Leigh Ann of Greeen 4 U, J.D of Honest Mom, Erica of Northwest Edible Life, Tara of Noshing with the Nolands, Nancy of Skinny Kitchen, Katie of Katie Neuman Photography, Alexandra of Good Day Regular People, Patsy of My Arms Wide Open, Pam of Momma Can and Laura of Find Catharsis. You guys are the best!
.